Design a site like this with WordPress.com
Get started
Skip to content
Ouroborus Book Services by Shayla May 4, 2019 5 Minutes

A long time ago, in a galaxy so big we can see an arm of it across our night sky but which is in fact not that far away at all since we’re inside it, cinema was introduced to an orphan farm boy from a desert planet whose elderly neighbour coerces him into a questionable space mission to rescue a princess from their estranged villain of a father. Along the way, our plucky orphan befriends a cheeky criminal, sees his dad murder his neighbour, joins an ancient cult, discovers superpowers, kisses his sister, loses a limb and saves the galaxy a few times. Who doesn’t have problems, right?

No wonder it seems to be the most relatable story told in recent western culture. At the very least, it’s one of the most viewed and loved. Somewhere between a little genre film some forty years ago that by all rights should never have gotten off the ground, two trilogy revivals, successful transitions to books and games, a multi-billion-dollar buyout and countless Lego sets, we find, arguably, the largest media thing our world has ever seen.

It’s hard to calculate the total cultural impact of a media franchise giant like Star Wars. We can count up the dollars, but even that takes a while, with $7 billion made at box office alone, with the video and DVD releases, merchandise sales and book royalties not counted in that. We can count the views, and find that according to a survey taken of US residents following the release of Rogue One, 40% of Americans have seen the original Star Wars film, with similar numbers for the rest of the franchise, but this doesn’t represent anyone else in the world where Star Wars has a similar foothold in mainstream media culture. We can look to the internet to count the number of works of fanfiction to have been archived under the Star Wars banner, but while the 50.8k count on FanFiction.Net is the largest number under their ‘Movies’ category (beating even Avengers) this doesn’t come close to encompassing the untold hundreds of thousands of drabbles, vids, meta discussions and multimedia works of fan art and fiction floating around other platforms like Tumblr or old forums. We’ll never count the impact, at least not without a really amazing algorithm that hasn’t been theorised yet.

Instead we’re better off looking at more qualitative research methods, observation being key among them. Note the consistency of Slave Leias, Darth Vaders and Jedi robes in Comic Con cosplay parades each year, never affected by the rise and fall of other major fandoms. Note the permanence of Star Wars classic lines of dialogue in the western vernacular. Luke, I am your father. Do or do not, there is no try. May the Force be with you. Note the familiarity of young children with characters from films they haven’t yet seen, toting Han Solo lunchboxes and Finn backpacks to school after having absorbed their parents’ and older family’s love for the franchise.

And of course, there’s the little aspect of the dedicated day. The Americanism of pronouncing dates in the order of month-day makes today May Fourth, which is too hard to ignore as a close-enough match to the famous phrase. Thus, May the Fourth be with you. The phrase, playing on the then-recently released space opera film, is first recorded on 4 May 1979, published in The London Evening News congratulating Margaret Thatcher on her election as Prime Minister. It took until the age of the internet for the day to really, properly take off among science fiction media fans, with early Facebook groups celebrating ‘Luke Skywalker Day’. Though this was short-lived, it provided the foundations for a fan-run Star Wars Day in 2011 in Canada, and by 2013 it had grown enough that proud new owners Disney observed the day with celebrations in their theme parks. By now, it’s known the world over. Eateries create specialty menus for the day (Brisbanites – see Netherworld’s Hoth Dogs!) and media-oriented businesses use May the Fourth Star Wars buzz in their advertising. Fans hold themed games nights and movie marathons (I imagine these are reaching a point of needing to start very early in the morning or pre-selecting a handful of films for said marathon). California even made Star Wars Day an official holiday this year. All this for a little movie that everyone thought would fail, made in the wrong time, unrelatable… 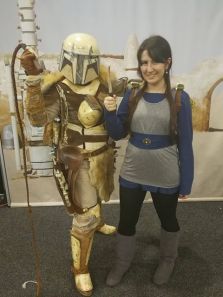 Possibly the most significant indicator of the cultural impact of Star Wars is its complete lack of visible impact. Like an asteroid so big it flattens an entire landscape, the impact of a media giant isn’t in dents and craters observable to the naked eye. There’s no pocket of nerds whispering about Star Wars behind artfully constructed walls of upside-down textbooks. There are no petitions being pushed around the internet by desperate fans trying to save their fandom from cancellation. And there’s no word for being a Star Wars fan. While Trekkies reading this are already mad with me for referring to Star Wars as the world’s biggest media franchise when theirs obviously started even earlier, the fact remains that their fandom has remained securely in nerd hands throughout the decades. This has its own field of benefits, and I could write an essay about Star Trek possibly being more of a science fiction fandom while Star Wars is definitely a media one, but I have enough essays to write that I’m ignoring in favour of this blog post. Contrary to Trek, George Lucas’s more fantasy-styled sci-fi has, somewhere along the way, transitioned from nerd territory to mainstream. When someone says they’ve never seen *insert science fiction film title here* you usually cut them some slack on the account that not everyone is a genre fan. When that title is Star Wars, you usually assume they’ve been living under a rock. Like, you have to have been actively avoiding it to have missed it for long, right?

The influence of Star Wars on culture as a whole is impossible to quantify, but its influence on the one is relatively easy to get a handle on. Just ask. Most people (except those rock people, who may have other interesting stories to tell about all the near-misses of their Star Wars­-less lives) will have a specific memory of the franchise to share that brings them joy or excitement. Seeing the movie for the first time. Playing lightsabers with their cousins in the backyard. Building a Millennium Falcon Lego set with their dad. Hearing John Williams’ score and feeling your heart soaring. Wanting to write a story as epic as that one, with unlikely heroes and villains that seem insurmountable and incredible intergalactic worlds to explore and all the hope and wonder of a billion billion billion stars out the windscreen of your trusty hunk of junk spaceship, accompanied by the best and weirdest friends you could ask for. Something about Luke Skywalker’s struggles and his pure-hearted tenacity speaks to us as an audience, and brings people together, and back to themselves, in some really beautiful ways. This May the Fourth, ask someone about their favourite Star Wars memory, and exploit its massive potential for sparking human connection.

How has Star Wars influenced you?